Welcome back to this course on reinforcement learning! In this episode, we'll discuss how we can tune our current code project in order for our deep Q-network to solve the Cart and Pole environment.

We last left off having completed our program by training our deep Q-network on the Cart and Pole environment. There, we saw that the network's average reward consistently grew over the 1000 episode training duration, with its final score reaching 100-episode average reward of 90.

This growing reward indicates that the DQN was learning the environment over time, however, in order to solve the Cart and Pole environment, we must reach a 100-episode average reward of 195 or higher.

Solving the Cart and Pole Environment

After experimenting with both the network architecture and the hyperparameters, I found that tuning these specs alone was not sufficient for solving this environment with our current setup.

Sometimes in deep learning, we may need to do more than experiment with hyperparameters or network architecture to solve a problem. We may, for example, decide we may need a more sophisticated algorithm to solve this environment, or perhaps reconsider how we're processing and passing the environment state inputs to the model.

In this particular environment, there are multiple options for how we may choose to determine the state of the environment.

In our project, for example, we chose to work with the difference of the last two rendered screen frames, and then pass this pixel data as input to the network.

As another option, which was implemented in the original paper that used a DQN to solve Atari environments, the authors used a stack of the last four frames as their input.

The Cart and Pole OpenAI Gym environment, as another example, returns the environment states (which are to be passed as network input) as 1-dimensional tensors containing the current cart position, cart velocity, pole angle, and pole velocity at the tip.

As we can see, the states returned by the Gym environment are much more simplistic than the pixel data we have been working with in our project.

As an experiment, I left the network architecture and hyperparameters unchanged from last time, and changed only the way we determined the environment's states and therefore network inputs. I used the states returned by the Gym environment rather than using image data.

With this change, our deep Q-network was able to solve the environment in just 156 episodes! 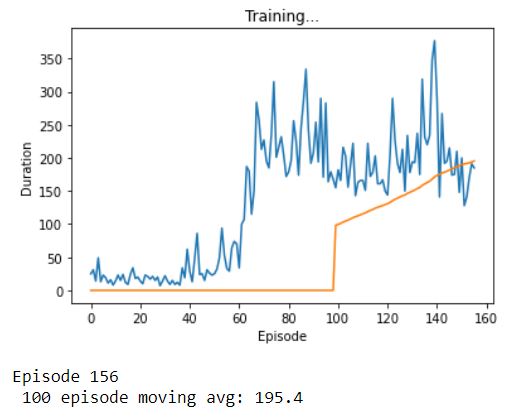 Now, this environment may be still be solvable using our original image inputs, but again, we may need to use another algorithm or change how exactly we're processing the image inputs in order to do so.

I encourage you to continue experimenting with the environment and share your results in the comments! In the mean time, below has all of the code changes necessary in our current project to solve this environment with the new states.

To make our current code work with the states returned by the gym environment, we need to make a few adjustments to our program.

The first change that we need to make is to our DQN class.

As such, we need to change the in_features in our first hidden layer, and we no longer need to flatten the input in the forward()function, as it's already flattened.

In the select_action() function of our Agent class, when exploiting the environment, we return the best actions for the given states returned by the policy_network. Now that the shape of our states have changed, we need to reshape the results returned by the network by adding one additional dimension to the tensor using the unsqueeze() function.

This change is shown in the last line of the select_action() function.

In the CartPoleEnvManager class, we have a few changes to make.

Firstly, since we're no longer dealing with screen frames to determine the environment states, the class no longer has a current_screen attribute. Instead, we now have a current_state attribute, which is initialized to None.

Similarly, the CartPoleEnvManager's reset() function now resets its current_state to the initial observation returned by the Gym environment when its reset, rather than resetting the screen as was implemented previously.

We also need to set the current_state in the take_action() function that is called whenever the agent takes an action in the environment.

Next, we need to change what is returned by CartPoleEnvManager's get_state() function.

Previously, this function would return the pixel data that resulted from the difference of the last two screen frames rendered in the environment. Now, we simply return the state of the environment that we've stored in the class's current_state attribute.

Finally, we create a new function num_state_features(), which returns the number of features included in a state returned by the Gym environment. This is so that we can know the size of states that will be passed to the network as input.

The only other changes regarding the CartPoleEnvManager class is that we no longer need any of the functions that we previously used for screen processing, and so they can all be deleted. These include:

In our extract_tensors() utility function, now that the states are 1-dimensional, we need to stack the states and next_states along a new axis, rather than concatenate (cat) them along an existing axis, as we were doing previously when our states were 4-dimensional (BCHW).

Check out this episode on stacking versus concatenating to explore this concept further.

Given the changes we've gone over so far, we now just need to carry those changes over in our main program where the actual training takes place.

The first change in the main program is that when we now initialize both the policy_net and the target_net, we no longer pass screen height and width to determine the input size, but instead call our new em.num_state_features() function to determine the size.

Next, we've now added a line to our main program's nested timestep loop to render() the environment to the screen. Previously, the call to render() was nested inside one of the CartPoleEnvManager's screen processing functions get_processed_screen() that we no longer utilize.

Finally, we've added one line to the end of the episode loop to end the program if the network solves the environment by reaching the 100-episode average reward of 195 or higher.

With this, our program will terminate once we reach a score greater than or equal to 195.

Note, due to the inherent randomness that is involved in this environment and with neural networks in general, the final results may vary. If you find that the model diverges prior to solving, then you may restart the program to reinitialize everything and try a second attempt.

That wraps up all of the code changes necessary to use our program with the states returned by the Gym environment!